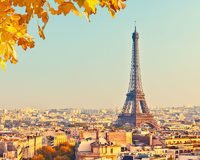 The Eiffel Tower is an iron tower located in the Champ de Mars in Paris. Its name comes from the engineer's, Gustave Eiffel. Built in 1889 for the International Exhibition, it has become a cultural icon of France and one of the most recognizable structures in the world. With more than 7 million visitors every year, it is the most visited paid monument in the world. The Eiffel tower is listed as a historical monument since June 24th, 1964.

With a height of 312 meters at the beginning, the Eiffel Tower remained for 41 years the highest monument in the world. It has 4 floors. Over the years, the height was increased several times with the setup of antennas for radio and television programs. It now measures 324 meters high.

The Eiffel Tower was designed by engineers Maurice Koechlin and Emile Nouguier. Gustave Eiffel then redeemed the rights. This project was intended to be the "highlight of the 1889 exhibition taking place in Paris", which also celebrated the centenary of the French Revolution. Built by 250 workers in two years, two months and five days, the Eiffel Tower is finally inaugurated on 31 March 1889. But the expected attendance happens only from the 1960s, with the rise of international tourism.

You can also book a table at the 58 Tour Eiffel restaurant.